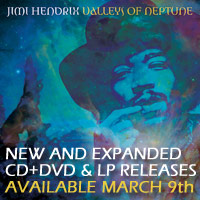 The new album “Valleys Of Neptune”, is set for release on CD and 2LP Vinyl on March 9, 2010. US vinyl to be pressed at RTI’s facility and individually numbered out of 5,000 pieces.

Also on March 9th, the original core Hendrix catalog including “Are You Experienced?”,

Experience Hendrix LLC and Sony Music Entertainment’s Legacy Recordings will launch their monumental 2010 Jimi Hendrix Catalog Project on Tuesday, March 9, with the release of Valleys of Neptune, a newly curated album of 12 fully realized studio recordings, more than 60 minutes of music never commercially available on a Jimi Hendrix album, from the artist Rolling Stone magazine called the greatest guitarist of all time.