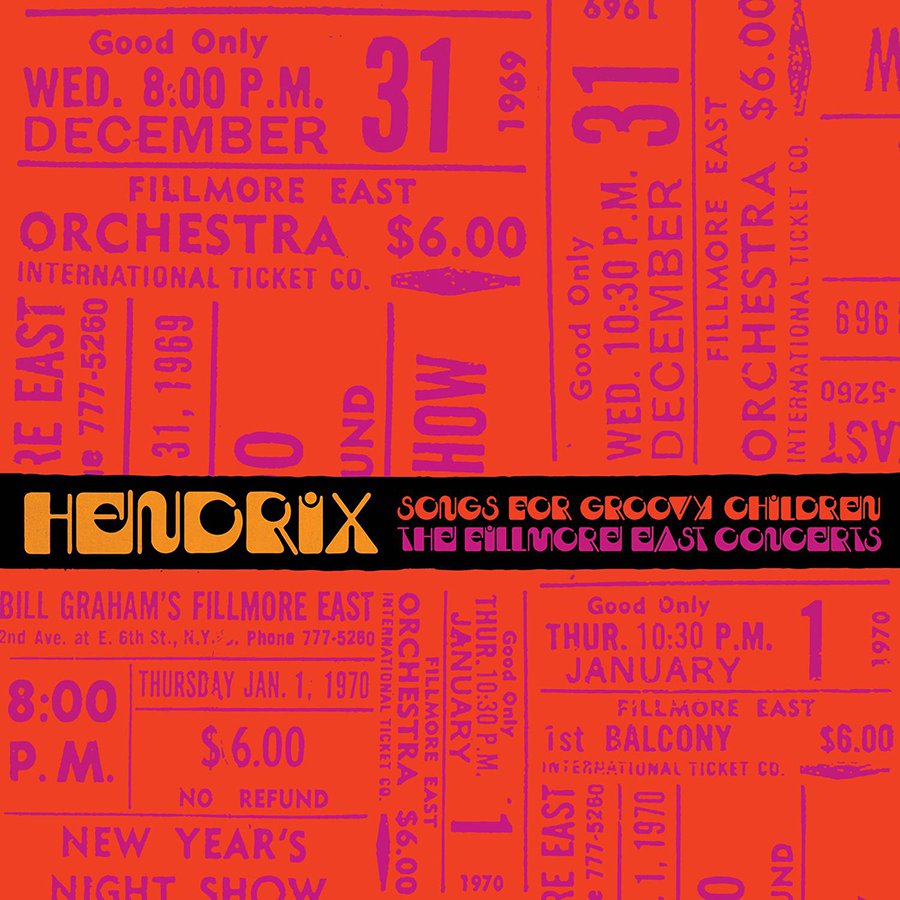 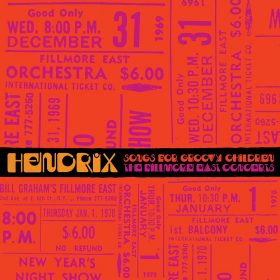 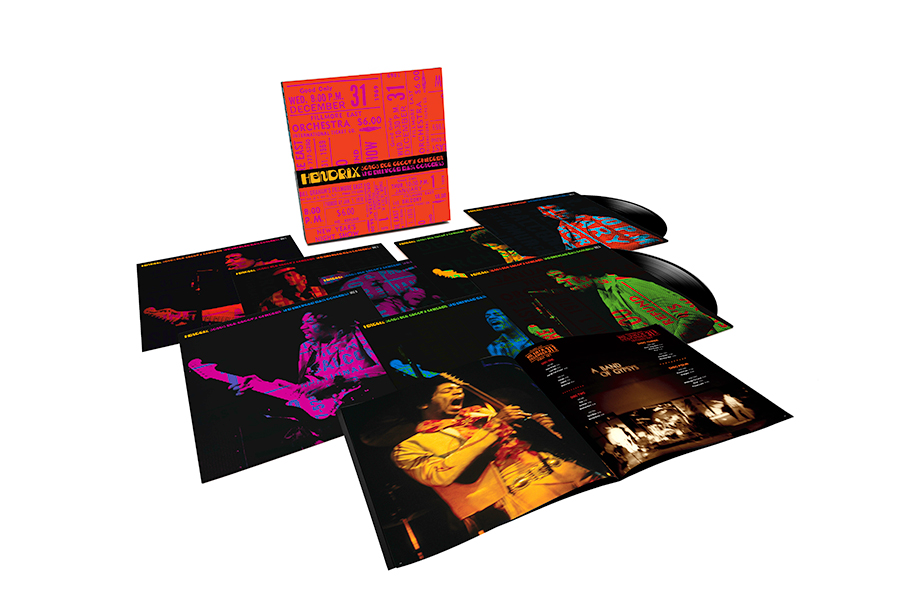 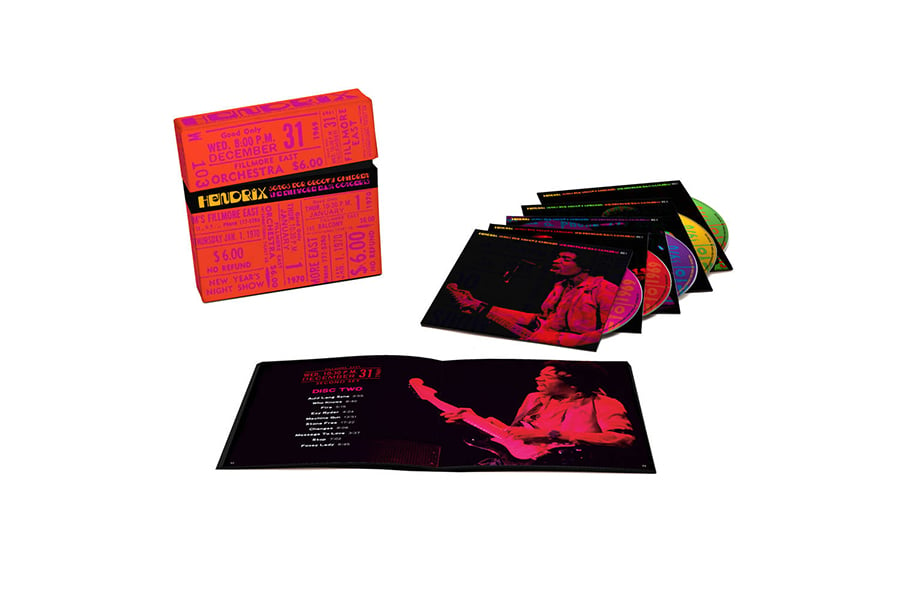 43 incendiary performances from the historic debut concerts by Band of Gypsys at New York’s Fillmore East.

Songs For Groovy Children assembles all four concerts from New Year’s Eve 1969 and New Year’s Day 1970. Presented in their original performance sequence and encompassing 43 tracks across 5 CDs or 8 LPs, the set boasts over two dozen tracks that have either never before been released commercially . The lavish package is filled with unseen photos and remembrances from bassist Billy Cox and liner notes by author/journalist/filmmaker Nelson George.

%back in print on CD/LP for the first time in a decade, and newly remixed

All songs written by Jimi Hendrix and published by Experience Hendrix L.L.C. (ASCAP) except:

“Changes” & “We Gotta Live Together” by Buddy Miles

“Steal Away” by Jimmy Hughes

Experience Hendrix L.L.C. and Legacy Recordings, a division of Sony Music Entertainment, are proud to release Songs For Groovy Children: The Fillmore East Concerts by Jimi Hendrix, on CD and digital November 22, with a vinyl release to follow on December 13. This collection assembles all four historic debut concerts by the legendary guitarist in their original performance sequence. The 5 CD or 8 vinyl set boasts over two dozen tracks that have either never before been released commercially or have been newly pressed and newly remixed.

Over the course of four extraordinary years, Jimi Hendrix placed his indelible stamp upon popular music with breathtaking velocity. Measured alongside his triumphs at Monterey Pop and Woodstock, Hendrix’s legendary Fillmore East concerts illustrated a critical turning point in a radiant career filled with indefinite possibilities.

The revolutionary impact Jimi Hendrix, Billy Cox and Buddy Miles had upon the boundaries and definitions of rock, R&B, and funk can be traced to four concerts over the course of two captivating evenings. These performances were first celebrated by Band of Gypsys, which featured six songs from the two January 1, 1970 concerts, including “Machine Gun,” the album’s dramatic centerpiece. Issued in April 1970, Band of Gypsys challenged and surprised the wide following of Jimi Hendrix with its extended arrangements and vibrant mix of rock and soul.

In June of 1969, at the height of their fame, The Jimi Hendrix Experience, closed a musical chapter. Before the shockwaves could settle, Hendrix assembled a new, expanded ensemble to perform at Woodstock in August. A new chapter was opened as Hendrix introduced Gypsy Sun and Rainbows. The large ensemble included Jimi’s longtime friend Billy Cox, on bass, whom he had befriended when both were serving with the 101st Airborne Division in Ft. Campbell, Kentucky in 1962. This Woodstock lineup was short-lived; from its ashes a new trio emerged in October that Hendrix dubbed Band of Gypsys, consisting of Hendrix, Cox and Electric Flag drummer Buddy Miles, who would also contribute occasional lead vocals. Hendrix was inspired by his collaboration with Cox and Miles and this creative renewal drove the development of promising new material such as “Power Of Soul,” “Burning Desire” and the extraordinary “Machine Gun.”

Their debut live performances were a series of four concerts at the Fillmore East in Manhattan – two on New Year’s Eve 1969 and two on New Year’s Day 1970, each of which were professionally recorded. Hendrix had sold out Madison Square Garden just nine months prior, but the Fillmore East was chosen as the setting for a live recording. Long before his fame, Hendrix had signed what he thought was a release for appearing as a studio musician in October 1965. Unfortunately, the one page artist agreement drafted by PPX Industries bound his services for a period of three years. Unwilling to live hands tied, Hendrix agreed to a 1968 legal settlement whereby Capitol Records would be granted the distribution rights for his next album. By the autumn of 1969, Capitol and PPX were pushing hard for the album delivery and Hendrix decided to give them a live album.

However stressful this legal obligation had been for the guitarist, the end result proved to be an artistic triumph. True to his unpredictability, Hendrix opened his four-show stint with a masterful, eleven song set that did not feature a single song he had commercially released. Exciting new songs such as “Izabella,” “Ezy Ryder” and “Burning Desire” thrilled the sold-out house. Hendrix would pepper the remaining three shows with supercharged reworkings of favorites such as “Stone Free,” “Purple Haze,” and “Fire” but these were presented alongside such devastating, newly developed fare as “Machine Gun.” In his review of the second New Year’s Eve concert, Down Beat critic Chris Albertson wrote, “That ability of his to utilize fully the technical possibilities of his instrument, combined with his fertile musical imagination, makes him an outstanding performer.”

By the end of January 1970, the band was history, but the blend of funk, rock and soul pioneered by the trio became history, making a profound impact on popular music in its wake. Notable devotees include funk pioneers Parliament-Funkadelic, Curtis Mayfield, the Isley Brothers (with whom Hendrix himself had at one time played) and Bootsy Collins, extending all the way forward to hip-hop. Countless artists cite the record as a cornerstone in their appreciation of Jimi Hendrix ’s remarkable abilities.

The original 1970 Band of Gypsys album was edited and sequenced from songs performed during the two Fillmore sets on January 1, 1970. Subsequent collections mined more material from each of the performances with significant chunks of these phenomenal recordings from those nights sitting unreleased for almost half a century. Newly mixed and restored in sequence without edits, fans can finally hear Hendrix, Cox and Miles blast through their genre-defying sets that included freshly written songs like “Earth Blues” and “Stepping Stone,” as well as Experience favorites inclusive of “Foxey Lady,” “Voodoo Child (Slight Return),” “Wild Thing,” “Hey Joe” and “Purple Haze.” Additionally, exciting new versions of Howard Tate’s “Stop,” “Steal Away,” by Jimmy Hughes and a searing “Bleeding Heart” by Elmore James highlighted the command that the trio had over blues & R&B music.

The lavish package is filled with unseen photos from talent such as Fillmore East house photographer Amalie Rothschild, Jan Blom (whose iconic, color saturated images provided the original artwork for 1970’s Band of Gypsys) as well as Marshall Amplifier representative Marc Franklin, who had full access to the group in their dressing room backstage. The booklet features remembrances from bassist Billy Cox and liner notes by author/journalist/filmmaker Nelson George. Songs For Groovy Children was produced by Janie Hendrix, Eddie Kramer and John McDermott – the trio that has overseen every project for Experience Hendrix since 1995. The box set was mastered by Grammy-winning engineer Bernie Grundman.