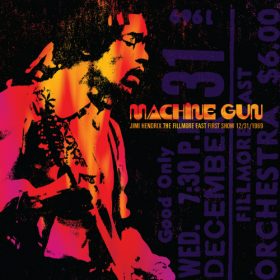 Machine Gun: The Fillmore East First Show 12/31/69 fully documents the debut performance of Jimi Hendrix’s short-lived but eternally influential Band of Gypsys. The group played four historic concerts at the Fillmore East in New York City – two on New Year’s Eve 1969, and two on New Year’s Day 1970. Never before has the first of these sets been available in its entirety. The vast majority of the performances have never seen the light of day in any configuration.